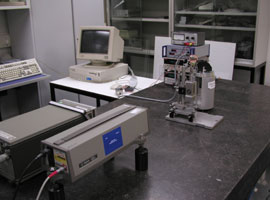 The sensor behavior is measured using the laser interferometer discussed below in a temperature controlled environment, comparable to that in a high accuracy CMM.

As mentioned, the behavior of the sensor can be measured for only one direction at a time with this setup. Therefore three V-shaped grooves are made on the top and on a side of the bracket (B). The sensor housing (G) has three spheres, which match the position of the V-shaped grooves. This connection is commonly referred to as a Kelvin clamp and allows an operator to rotate the sensor with respect to the bracket by 120 and 240 degrees respectively.

The calibration setup uses a flat mirror differential laser interferometer to measure a displacement of the measurement mirror relative to the reference mirror. Some merits of the interferometer setup:

The setup is placed in a temperature controlled laboratory, which is conditioned to plusminus 0.5 degrees Celsius. An isolation box limits the fluctuations to about 2-10 mK over a 15 minute interval, which is acceptable for the calibration and causes an error of 0.5 nm or less.